Eastern Division 2013 NordicFest was hosted in Western App. Region by Laurel Highlands Nordic Ski Patrol coordinated by Diane Murray on March 1st thru the 3rd, 2013. There were 26 people which attended the event over the weekend. Patrollers came from as far as upstate New York to northern West Virginia and as far east as western New Jersey. 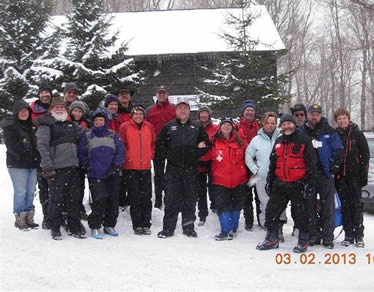 Low angle rescue was taught by John Boburchuk from Wilderness Emergency Rescue Institute. They practiced on knot skills that will be incorporated later in to low angle rescue rigging exercise.

Afternoon activities were a Ski Enhancement seminar by Nordic Advisor Jerry Timcik. Patrollers also had the chance to practice femur traction splint and emergency toboggan building on the ski trail.

I want to Thanks all the helpers that cooked, set and cleaned up during the event.  Also Thanks to all instructors for their time and skills. With your help the event was a success.